Billing plans apply individually to each object in the fleet. This means that one user can have some objects with a higher plan, while some objects can have a lower plan. This is convenient in cases when some vehicle requires additional control and attention, while for others, basic monitoring is enough.  Objects (vehicles) are limited (or unlimited) in functionality based on their selected billing plans. Having a higher billing plan for one object will not unlock all the premium functionalities for objects with a lower plan.

Currently, there are six billing plans:

A chart of functionalities for each plan is presented below: 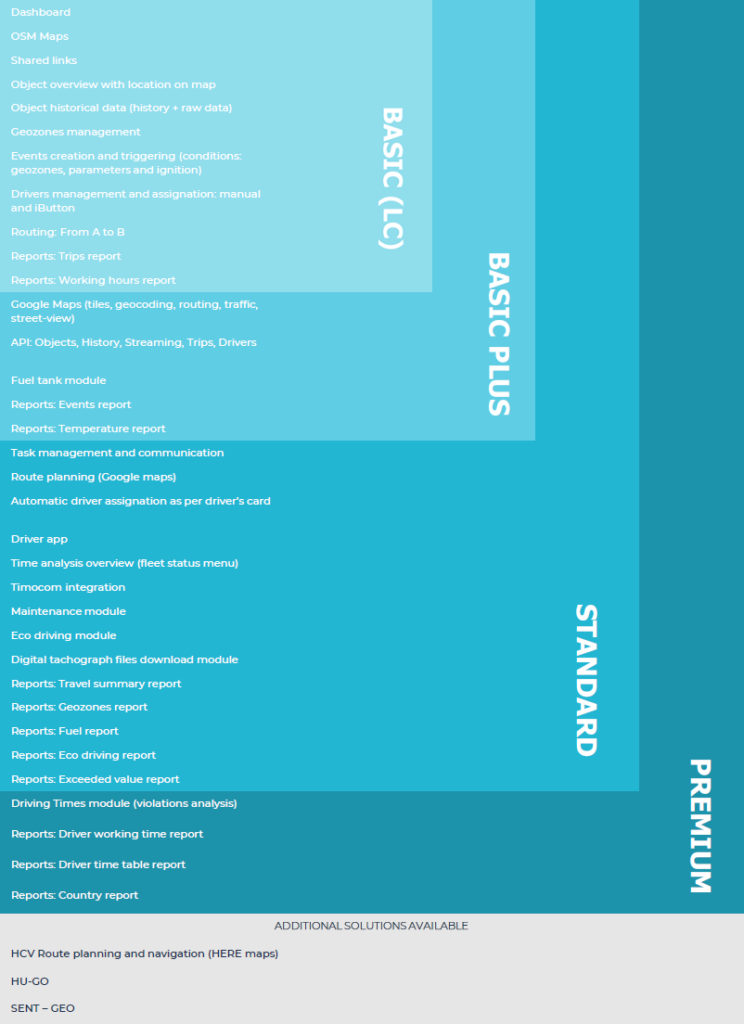 You may see objects in one webuser with different plans. However, if there is at least one object with a BASIC (LC) plan (OSM solution without Google maps) – all objects will be considered as BASIC (LC) plan objects and you will see only the low cost solution (no Google maps and no other functionalities that are dedicated for higher plans even if there is one or more objects with a BASIC PLUS or higher plans).

The webuser will see functionalities in the system according to the highest plan of their objects (except if there are objects with BASIC (LC) plan, in this case refer to the previous rule). If there are objects with different payment plan levels visible for the webuser – some functionalities may be visible but locked for some objects if they have a lower payment plan compared to other objects visible for the webuser.

Note
In cases when a user lowers a plan for an object, for example Standard to Basic Plus, data that was available for the vehicle while it was with a higher plan will be deleted and unrecoverable. In this case this would include Eco-driving data, Travel summary, Geozones and Fuel reports as well as Tacho downloaded data and Maintenance task.

Clients will be informed about overdue payments for services with a pop-up window, right after logging into the system. This window will also inform the user of the set time terms during which they have to pay for the services. If the payment is not processed within the set time period, the user will be blocked from entering the fleet management system. To change an object’s plan, unblock an unpaid account or any other billing and administrative needs, please contact your service provider directly.